History and train buffs looking to let off some steam need to add Carson City, Nevada to their travel plans. Located on the east side of the Sierra Nevada Mountains, the railways that lay within the Silver State tell a compelling story of grit, iron-will, and legendary routes that visitors to the state’s capital can still experience to this day. In addition to a variety of railway experiences, Carson City’s museums are filled with railway history making it the perfect destination for train enthusiasts near and far. 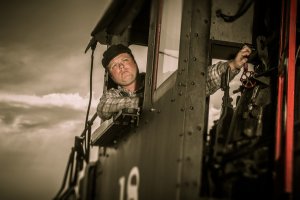 The Virginia and Truckee Railroad is one of the most famous short lines in American history. It serves as a reminder of the State’s deep-seated mining roots and the connections forged between the V&T Railway, the Central Pacific Railroad, and, ultimately, the transcontinental railroad.

According to Jerome Edwards, who provided a written history of the V&T Railway for Nevada Humanities, the Comstock region posed problems for railroad construction because of its difficult terrain. Virginia City’s mines were incredibly productive in the mid-1870s, with 30 to 45 trains operating daily along the 55-mile-long railroad. Because of the winding route, it became known as the “Very Crooked and Terribly Rough Railroad.” Over the years, as mines became less productive and fortunes began to decline, the V&T Railway reinvented itself in multiple ways – adding railway lines, turning its focus to transporting tourists and other passengers, and, eventually, selling off to different owners.

In the early 1990s, V&T Railway enthusiasts along with Storey County, Carson City, and state officials began reconstructing the historic railroad. Through the efforts of many across the state, including the Nevada Legislature, this rebirth of the V&T Railway Commission allows for the legacy of Nevada’s railroads to live on. 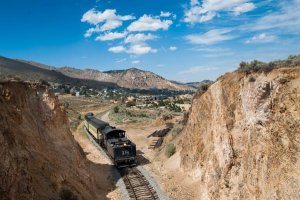 History comes to life when taking a trip on one of the V&T Railway trains. With routes that run through the scenic northern Nevada landscape, each experience is different and offers something for everyone – from the most gung-ho train enthusiast to those looking to experience something new.

Rail buffs can enjoy an all-day train journey with the Virginia City – Carson City Round Trip. Departing from Carson City’s Eastgate Depot, the 24-mile round-trip tour will have visitors cruising over tracks through the historical location of mining and mills on the Comstock. Ride through tunnels, canyons, and mining towns aboard a Baldwin 2-8-0 steam locomotive. The trip is perfect for those looking to experience Virginia City with a 3.5 hour stopover in the historic mining town.

Those looking for a flavor of the railway can take a 35-minute ride back into history with the Virginia City to Gold Hill railway experience, operated by Virginia & Truckee Railroad. The journey is narrated by the conductor who shares stories of the Comstock Bonanza, when the railroad was built, and tales of Virginia City as the richest city on earth.

Other popular V&T Railway experiences include the Mother’s Day Train, Memorial Day Weekend Train, and Polar Express Train Ride. The V&T Railway also creates the perfect night out for friends or couples with Toast of the Canyon, a 45-minute trip where riders can enjoy libations and appetizers as they take in the scenic Carson River Canyon from their railcar. 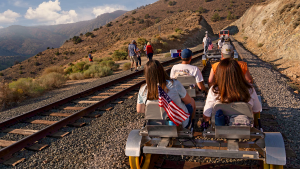 One of the newest and most popular ways to take in the sights are the Carson Canyon Railbike Tours. Operated by the V&T Railway Commission, this attraction allows riders to pedal the railway with power-assisted railbikes along the Carson River Canyon. These railbikes are the only place in northern Nevada where people can experience the rush of wind through their hair as they marry old with new, pedaling historic routes with the latest trend in railroad exploration.

Follow the Tracks to The Nevada State Railroad Museum 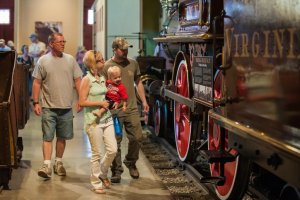 Preserving Nevada’s railroad heritage for generations to come, The Nevada State Railroad Museum offers a significant collection of locomotives, rolling stock, artifacts, photographs, and memorabilia directly related to railroads and railroading in Nevada. Interestingly, many of the locomotives and cars at the museum were purchased from Hollywood studios, where they were made famous in movies and in television shows.

In addition to permanent and rotating exhibits, select pieces of equipment in the collection are restored and operated throughout the year to demonstrate steam and early gasoline technology and provide visitors a first-hand experience with railroad history through the sights, sounds, and sensations of a train ride. These steam train rides or motor car rides are offered every weekend, May through September, and select dates in October and December.

With enough train activities and adventures to easily fill a weekend, Carson City is Nevada’s go-to “training” destination. In addition to historic railways, the city offers easily accessible lodging, culinary delights, and an opportunity for everyone looking to take a trip back in time.

An Insider’s Guide to the Carson Canyon Railbike Tours