What was once a blue line that traced the path and past of the Kit Carson Trail, has now been upgraded with sandstone markers crafted from the old prison quarry which were created and crafted by inmates in the Silver State Industries (SSI) program at Northern Nevada Correctional Center. 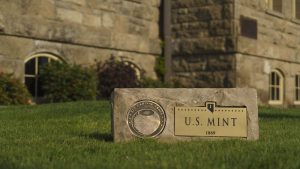 There are 48 markers in all, identifying the stops along the historic Kit Carson Trail, featuring landmarks including 1800s-era Victorian-style homes, museums and churches.

Teri Vance, marketing coordinator for Silver State Industries and liaison for the project, said the inmates were an integral part of the process of making the markers from sandstone, a material that is part of Carson City’s history. “Visit Carson City came to us with the idea of using sandstone from the quarry at the Historic Nevada State Prison – the same sandstone used to build the Capitol, U.S. Mint and other historic structures. It was a natural partnership for us,” she said.

Silver State Industries, the industrial arm of the Nevada Department of Corrections, has a variety of shops, including a print, metal and wood at Northern Nevada Correctional Center. It took roughly 6-8 hours to make each marker with the hand craftsmanship of about eight inmates, including a rock carver, from the different shops.

The inmates spent about four months brainstorming the project and experimenting with different designs through trial and error.

“We brought those ideas to the Visit Carson City team then to the Carson City Historical Society, and incorporated their feedback. Carson City Public Works then designed the pedestals for the installation of the markers. It was a true collaborative effort,” said Vance. 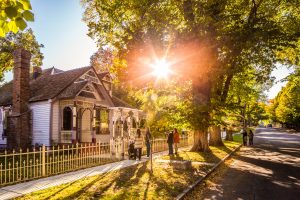 The team ultimately worked with sandstone, aluminum and the existing medallions to create the shape and finish of each marker.

“It was absolutely fun to work on,” said inmate Ed Phelps, who has been with SSI for 13 years. “It’ll be seen by a lot of people for a long time. It was really cool to be able to work through the challenges to put a good product out there.”

“It’s been a unique, special and collaborative experience to work on this,” said Vance. “I think the inmates feel like they are making a difference – a mark if you will – on something positive for our community. We love Carson City and are honored to be part of its history.”

Next time you’re in the area, take the 2.5 mile, self-guided walking tour through the West Side of Carson City. Some interesting stops along the way include the home of Orion Clemens, Nevada’s first Territorial Secretary and the brother of Samuel Clemens, who later gained fame as Mark Twain.

Did you know that the inventor of the Ferris wheel owned a home on the Kit Carson Trail? George Washington Gale Ferris, Sr. came to Nevada with his family in 1864 as a gentleman farmer. He also planted numerous varieties of tree, many of which still adorn the Capitol grounds. George Jr. became an engineer and was challenged with building something “which would rival the Eiffel Tower” for the World’s Colombian Exposition of 1893. 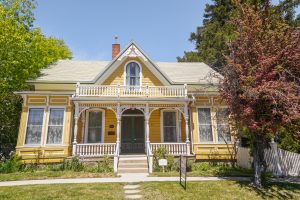 There’s a little bit of the North Pole in Carson City. Louis Prang had a lovely home on the Kit Carson Trail and became known as the “Father of the American Christmas Card” after creating the first painting- like prints for the public. His work can be seen in the display boxes in front of the home today.

Here are more ways you can discover the Kit Carson Trail:

It’s an ideal time to explore your backyard safely if you’re a Nevadan – outdoors, surrounded by history and close to shops and restaurants. If you’re road tripping from a bit further away, you’re sure to discover how much there is to do and see in and around Carson City.