No Pain, All Gain: Taking on the Carson City Triathlon

Finally, folks, the day has come where we can all refer to ourselves as athletes. You know those back stories about Olympians that detail how they were raised and how they dedicated their entire lives to their sport to become the best at what they do? This is our collective version of that. Most of us can proudly say that we have eaten nearly every day of our lives. And who knew that all along we weren’t just feeding ourselves – we were training for local greatness?

This event isn’t every four years, or even once every year. You can complete this event Triathlon any of day of the year (except major holidays). That’s right. We have our own spoken tradition that involves eating, drinking, and hot spring soaking, and it is lovingly referred to as the Carson City Triathlon.

So what is this triathlon exactly?

While no trophies are awarded and the national anthem won’t be played, this endeavor is sure to leave you fulfilled. While the official order of events has long been debated, completion of the Carson City Triathlon includes having a drink at Shoe Tree Brewing Company, heading next door for dinner at Sassafras, and taking a dip at the Historic Carson Hot Springs. Personally, this is the order in which I completed the events. Please, please, hold your applause to the end. 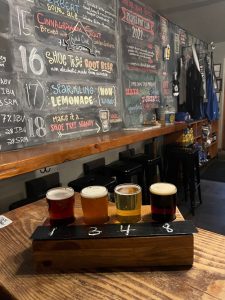 Most triathlons typically begin with nerves, wetsuits and cold water for up to a one mile swim. Ever put on a wetsuit? Its awkward. Thankfully, here in Carson City, we kick off our endeavor with beer instead. Before you head into Shoe Tree Brewing Company, make sure to put your name in for a table next door at Sassafras as it’s a hot spot to be for dinner. Then, just a few steps away, you’ll walk into a haven of reclaimed wood, metal, and a beer list displayed as a full wall chalk board. No squinting to see this menu! Shoe Tree Brewing is named after the famous tree along Highway 50 (BACKLINK to a loneliest road article if you have one) where for years travelers of the loneliest road have tossed old shoes to hang on its branches. In similar style, the brewery’s beers strategically named to pay homage to Nevada’s treasures, with their Ash Canyon Amber Ale even serving as a Carson City shout out! Boasting up to fifteen of their own beers to offer on a given day, your favorite style of brew is bound to be available in locally made form.

Now as a little plot twist, I walked in only planning on having a conversation about the company and gathering a list of local favorites to report back to you. I am one of those unlucky folks who has been cursed with the dreaded gluten sensitivity. For me, beer has been off the menu for years! At least so I thought. When I mentioned this to Beth, she kindly went out of her way to explain that several of Shoe Tree’s beers undergo an enzymatic process that eliminates the gluten from the beer! While it’s not able to be fully labeled as gluten free yet, they proudly offer several gluten-reduced options. Before you know it, I had a flight in front of me of four gluten-reduced options: an amber ale, a double ipa, a blonde ale and a brown ale. Us gluten free folks are not used to such variety! Albeit a bit skeptical about the claim, I was delighted. Let me tell you, as someone who gets sick within minutes of consuming gluten, I was so thrilled to be 100% well after sipping on my flight. Shoe Tree Brewing Company gave a deprived girl her first beer in years! Cheers to that! 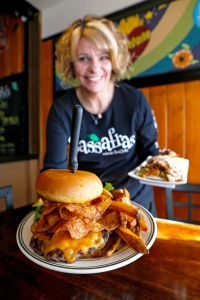 When you get the call that your table is ready next door, finish the last of your beer and head over next door to a wonderful collision of ski lodge interior and southwest décor. If you didn’t catch it in their name, “eclectic” is the operative word at Sassafras. Go ahead and order another of whatever brew you were drinking next door and enjoy the view. While you can absolutely have a standard American meal here, take your time reading the menu and considering if you’re up for a culinary adventure. Personally, I opted for the Peanut Butter Bacon Burger and my husband ordered their Cheese Curd Burger. It was a wild ride! This gluten free gal got lucky again with their option for a gluten free bun. If you’re not sensitive to gluten or foods fried in a shared fryer, I recommend ordering their homemade potato chips. They looked perfectly browned and incredible! The restaurant has a small stage for live music to boot. Be sure to check their social pages for updates on performances. 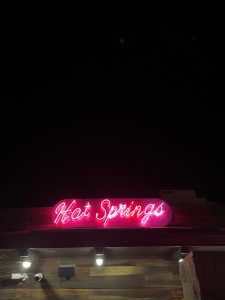 You’ve drank and  you’ve eaten, now it’s time to rest and digest. We talked earlier about the awkward wetsuit struggle most triathletes face. Not in the Carson City Triathlon. No need to peel off tight neoprene and shove your wet feet into sneakers here—just bring your bathing suit and change at your own relaxed pace in the locker rooms at Carson Hot Springs.

Recently remodeled, our local soaking hub is the place to be, especially in the colder months. Enjoy one large pool and three medium sized pools, new lighting, a fireplace, and on some weekends, live music! The jets in two of the smaller and hotter pools provide a great cover noise that makes it easy to have a somewhat private conversation even on a busy night when the tubs are full. There is also a new medium sized pool that is still hot enough to soak but kept at kid friendly temperatures and a shallow four foot depth. The resort has several private soaking tubs that can be rented as well and two sauna rooms for that extra boost in heat. Bring the sore muscles you may have from any, dare I say “real” athletic endeavors, and let them melt away here.

Cue the footage of baby you in your highchair being spoon-fed mashed carrots. Cut to a scene from the bath tub. You’ve been eating, drinking and soaking your whole life to prepare for this moment.

There is no medal for this triathlon, but these events are pure gold. In a perfect world, you’d exit the hotsprings pool, relaxed and satisfied from great food and brews, and be wrapped in an oversized towel that says “Champion.” Perhaps you could arrange that scenario amongst your friends and family when you complete the Carson City Triathlon for the first time. Until then, be sure to tag us in your victory photos! We’re cheering for you!