The Consolidated Municipality of Carson City, Nevada’s territorial and state capital, has a rich and colorful frontier past.  Carson City was founded as a community in 1858, seven years after the first settlement of Eagle Station trading post in 1851. Eagle Valley had been settled by ranchers. Carson City is named for the famous frontiersman and scout Christopher “Kit” Carson. During his 1843-1844 expedition, John C. Fremont had named Carson City’s nearby river for Kit Carson, Fremont’s scout.  Pioneer Abraham Curry arrived in Eagle Valley in 1858 and soon thereafter surveyed and plotted a town site.  A cadre of well-connected attorneys whose names still decorate street signs here (Proctor, Musser) bought the richest part of the valley for $500 and a herd of horses. The farsighted and optimistic Curry set aside 10 acres expressly for the construction of a capitol — this was before the formation of Nevada Territory in 1861. Carson City was soon designated both the territorial capital and county seat of the new Ormsby County.  President Abraham Lincoln, recognizing the importance of Nevada’s silver and gold to the Union’s Civil War effort, signed the proclamation that ushered Nevada into statehood on October 31, 1864.  Carson City was selected as the state capital at the constitutional convention and has retained that honor to the present day.

Following the discovery of gold and silver on the nearby Comstock Lode in 1859, Carson City became a thriving commercial center. To their astonishment and delight of its citizens, the discovery of the Comstock Lode brought their Carson City to life as a freight and transportation center. Abe Curry, then built the crude Warm Springs Hotel a mile to the east, and when Carson City was selected as the territorial capital in 1861, leased it to the Legislature as a meeting hall. The legislature established Carson City as the seat of Ormsby County (named for one of the dead “heroes” at the Battle of Pyramid Lake). The legislators also leased the Warm Springs Hotel to serve as the Territorial Prison, and named their genial host and landlord, as its first warden. The property was eventually purchased by the state and is still a part of the state prison system.

Carson City was confirmed as Nevada’s permanent capital with statehood in 1864, and development thereafter was no longer completely dependent on the health of the Comstock mines. Until they began to decline in the 1880s, these mines provided Carson City with most of its economic importance as a freight and staging center, and as a marshalling point for much of the timber harvest in the Lake Tahoe basin. The United States Mint in Carson City was completed in 1869; it is today the site of the Nevada State Museum.

The V&T was completed between Carson City and Virginia City in 1869, with the railroad’s shops and main offices in Carson City. The V&T rails were extended north to connect with the transcontinental railroad at Reno in 1872. By 1874, when the Comstock mines were reaching their peak production, 36 trains a day passed through Carson City. The huge sandstone V&T engine house and roundtable dominated the northeast corner of the city for well over a century. Neglected and falling into ruin since the track was torn up in 1950, they have now been torn down and the stones sent to create facades for wineries in the Napa Valley. 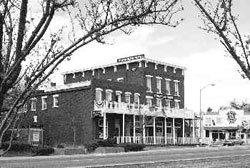 Like many another Nevada town in its youth Carson City was made The historic St. Charles Hotel is part of Carson City’s revitalized historic district and is a major attraction of the modern city lively, and occasionally dangerous, by the presence of dozens of rootless, restless men. Shootings, stabbings and street brawls were commonplace around Nevada, but Carson City was unique in contending with outbreaks from the State Prison.

After the turn of the century Carson City participated vicariously in the Tonopah and Goldfield booms far to the south. Much of the freight and passenger traffic bound for those two celebrated cities was routed to Reno and then through Carson City to Mound House on the V&T railroad. From there the narrow gauge Carson & Colorado carried it to Sodaville where freight wagons and stage coaches were waiting for the last leg of the journey.

This traffic through Carson City came to a sudden halt when the Southern Pacific built a branch line connecting with the C & C from the east that bypassed the V&T altogether. The capital then resumed the quiet lifestyle that evolved after the decline of the Comstock, and which still continues (with variations) today. At the turn of the century the railroad extended its line south into the Carson Valley, but the Minden-Gardnerville traffic never came close to replacing the Tonopah-Goldfield traffic, and the railroad, and Carson City, slipped back into quiescence. In 1930 the population had dwindled to 1,800, about a quarter of what it had been at the peak of the mining boom 50 years earlier. 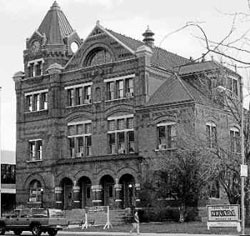 The magnificent 1890 Federal Building is a Carson City landmark. It has been renamed the Paul Laxalt building in honor of Nevada’s former Governor and United States Senator.In 1933 the highway was paved through town, but for a long time afterward the kids could roller skate on it without worrying too much about traffic. In those innocent days Carson City advertised itself as America’s smallest state capital.

In 1960 Carson City regained its 1880 population level, and in 1969 Ormsby County was merged into Carson City to consolidate government services. There are now nine state capitals with smaller populations than Carson City, and in fact, with its area of 146 square miles, Carson City could now advertise itself as one of the largest state capitals in America!