Born in 1833 in Savoy, Massachusetts, Duane Bliss left home at the age of 13 to work as a cabin boy on a ship sailing to South America. Following a two-year journey, Bliss decided to join the rush of fortune seekers heading to California and booked passage on a ship to Panama, with plans to travel across the isthmus before catching a steamer to San Francisco. 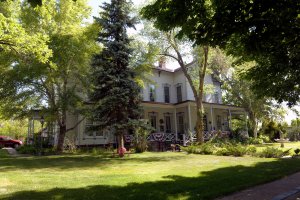 The historic Bliss Mansion, once the largest home in Nevada in its time. See this home along the Kit Carson Trail.

During the overland journey through Panama, Bliss contracted “Chagres Fever” and would have died if not for a friendly gambler and miner named Diston, who nursed him back to health. Diston helped Bliss reach California, then set him up with a team of mules and a small mining claim before departing for parts unknown. Bliss never saw his benefactor again.

In 1860, Bliss relocated to Gold Hill, Nevada to mine for silver. Within a short time, he had become a partner in a bank, which was eventually bought out by the larger Bank of California. In 1871, he invested in timber land at Lake Tahoe, and relocated his wife and five children to Carson City. Bliss soon became one of Nevada’s most successful businessmen as a result of his thriving lumber business, the Carson and Tahoe Lumber and Fluming Company. Additionally, he built a small railroad, the Lake Tahoe Railroad, to carry lumber from Glenbrook to a flume station at Spooner Summit. In 1879, Bliss built a grand home on Mountain Street in Carson City.

He also erected a spacious summer home at Glenbrook and a mansion in San Francisco. In 1893, Bliss recognized that tourism was the future at Lake Tahoe and embarked on a new and equally successful enterprise. He formed the Lake Tahoe Transportation Company to build a rail line to carry tourists to Tahoe from the Southern Pacific line at Truckee, California. Additionally, he commissioned the construction of The Tahoe–a luxury steamboat to carry tourists across the lake, and built a first class resort at Glenbrook, the Tahoe Tavern. Bliss died in 1907.