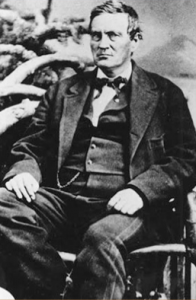 Often considered the father of Carson City, Curry was born in New York in 1815 and arrived in Carson City in 1858. With partners John J. Musser, Benjamin Green, and Frank Proctor, he purchased about 1,000 acres in Eagle Valley and laid out the community of Carson City, which he tirelessly promoted.

Additionally, Curry built the Warm Springs Hotel (at the site of the present Nevada State Prison) as well as the prison, the Carson City Mint building, and the Virginia and Truckee Railroad shops in Carson City.

He also donated ten acres in the center of town to the state to be used for a state capital, which helped ensure that Carson City would become the political heart of Nevada. Curry’s political accomplishments included stints as a Territorial Assemblyman from 1862-63, a Territorial Senator from 1863-64, warden of the state prison and superintendent of the Mint. Curry died in 1873 and was buried in the city he helped to create.