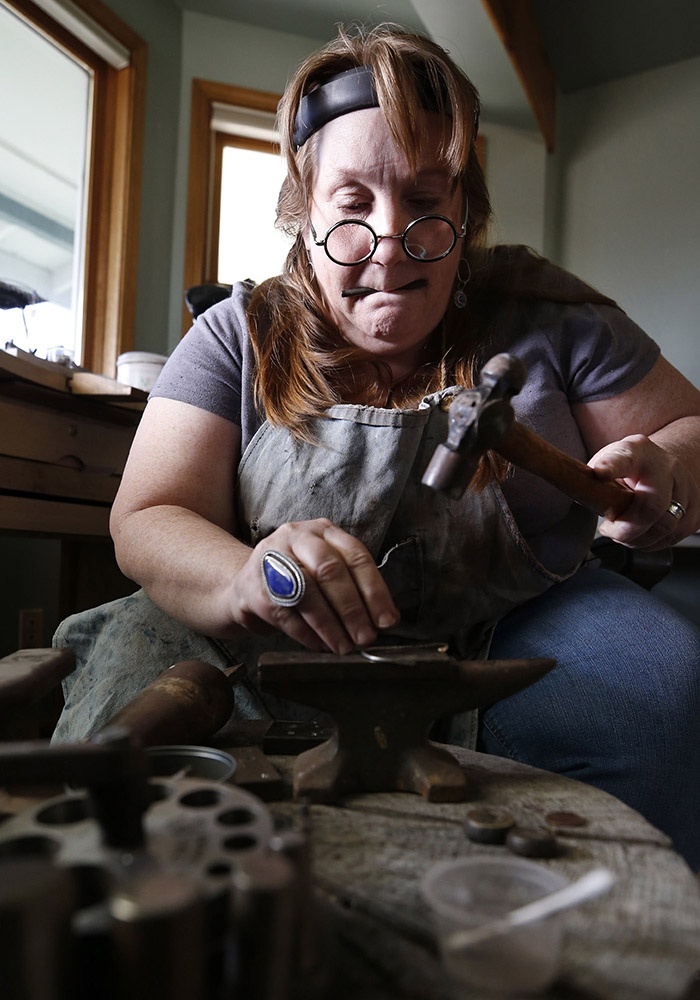 As an artist and jewelry maker, Denise Jenkins keeps an eye on the fashion world.

“In January, I’ll look at the colors of the year,” she said. “I look at the New York scene.”

But when she sits down to create a piece of jewelry, the inspiration comes from within.

“I am the trend,” she said. “It’s my aesthetic. They’re buying a little piece of my soul made out of metal and rock.”

It only makes sense. Her entry into the jewelry-crafting world was just as organic.

While in art school, she took a jewelry class to meet the requirement for sculpture credits. Wearing her own creation to a bar one night, she ran into a group of women from the Tri Delta sorority.

“One of them said, ‘I like your ring,’” Jenkins recalled. “I offered to make her one.”

That turned into an agreement where Jenkins made key chains, rings and bracelets for the sorority in exchange for tuition fees.

“By the time we were seniors, there were engagements and weddings and such,” she said. “I was very grateful. They paid for my school.”

Still, her father feared she needed a more steady livelihood, so she took a teaching job.

For the past 30 years, she’s made her living in the arts. Mostly, she creates jewelry, but she also paints — landscapes, still life and portraits — and plays the Celtic fiddle.

“When I get sick of metal, I grab a fiddle and go crazy,” she said.

Her studio is set up in the north Carson City home she shares with her engineer husband, Mike, where she works an average of 60 hours a week.

She creates six to 10 pieces a day that she sells in eight galleries, the occasional fair and online at Etsy and Instagram.

Hands down, she said, she sells mostly earrings and “big, huge knuckle-busting rings.” It’s the same kind of ring she likes to wear when playing the fiddle, to balance out her bow.

She keeps her price point affordable, usually charging between $80 to $300.

“At the end of the year, I have less than 10 pieces that I’ve not been able to sell,” she said.

“She’s probably my best-selling artist,” he said. “Her work is very earthy and everything is a one-of-a-kind piece. She’s also a very accommodating jeweler. If someone wants this or that, she will work with them.”

Jenkins forges the metal in her own studio and shapes it with an anvil.

“All blacksmiths use the same tools,” she said. “We’re all going to use the same setup — a hammer and a big torch with fire.”

Her stones come from all over the world.

“I purchase directly from the miners,” she said. “I know how many carats, how much each is and where they all came from.”

While she relies on her own spark to design the pieces, once they are created, she releases them.

“Once I make it, it’s not mine anymore,” she said. “They’ll zoom in on the one thing. They’re drawn to something. I didn’t know it, but I made it for that person.”

It’s all about making that connection.

“People like to wear adornment,” Jenkins said. “It’s a way of telling the world who they are. It’s everybody’s story, I just facilitate it. I give you the wherewithal to indulge in your lust for really decadent stuff.”