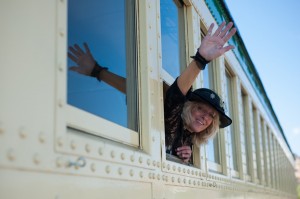 Carson City, Nev. – Kicking off its 2019
season, V&T Railway will hold a special Mother’s Day train on Saturday, May
11 and Sunday, May 12. Guests will experience a 24-mile round-trip ride through
the historic Comstock, departing Carson City (Eastgate Depot) at 10 a.m. and
will arrive in Virginia City at approximately 11:30 a.m., before returning to
Carson at 4:15 p.m. Tickets are $45 for adults, $40 for seniors and $25
for children ages 3 to 16. Children two and under ride free when they sit on a
parent’s lap.  Tickets can be purchased online at www.vtrailway.com or (877) 724-5007.

“We are very excited to
welcome guests to our 2019 season with our pre-season Mother’s Day train and
are looking forward to celebrating all of the mothers in the area,” said Elaine
Barkdull-Spencer, General Manager for the V&T Railway. “This season is
gearing up to be our most exciting yet with several new events including a
special train focused on the kick-off of the 150th anniversary of the Virginia
and Truckee Railroad. Additionally, we have opened ticket sales for our entire
2019 season including a special pre-sale for Polar Express.”

Featuring 100-year-old
Pullman coaches pulled by a heritage diesel locomotive, the ride will be fully
narrated, allowing guests to experience the Old West during this pre-season,
round-trip ride. Prior to departing the depot, guests will enjoy free mimosas,
extravagant pastries and moms onboard will receive a long-stemmed rose on
their return to Carson. During the ride, guests will see several historic sites
including abandoned mine shafts and a possible glimpse of the region’s wild
mustangs while passing through two tunnels during the trip. Once in Virginia
City, families can enjoy sightseeing, historic tours, dining, shopping and much
more before returning to Carson City.

Trains depart Carson City
at 10 a.m., arrive in Virginia City before 12 p.m., with the return trip to
Carson City arriving at approximately 4 p.m. Tickets can be purchased online
at www.vtrailway.com or (877) 724-5007. The
Eastgate Depot is located approximately seven miles from Carson City off Flint
Road at 4650 Eastgate Siding Road.

For more information on the V&T Railway’s Carson City to
Virginia City train ride and for a calendar of upcoming events, visit www.vtrailway.com. For the latest updates
on the V&T, find us on Facebook and Instagram.

Established in 1870, the V&T Railroad was
completed between Carson City and Virginia city as Nevada’s first short-line
railroad. Two years later, the track was extended to Reno to connect with the
transcontinental Central Pacific Railroad. After 80 years of operation, the
train ceased operations in 1950 but was reconstructed by the Gray family
and reopened in the late 1980’s. Continuing to work on the line, the Gray’s
reopened the line between Virginia City and Gold Hill in 1991 and in 1993, the
state set up a commission to rebuild the line, known as the Nevada Commission
for the Reconstruction of the V&T Railway. The train continues to operate
yearly and features several special events including the wildly-popular Polar
Express.

The Haunted History of Carson City