Get ready to put the pedal to the dirt this weekend, June 26-28, in the fourth annual Carson City Off-Road. For the past four years, cyclists of all levels from Nevada and beyond have flocked to Carson City to explore northern Nevada’s scenic terrain and epic trails, learn more about our region’s diverse history, and mingle with “bike-minded” people! 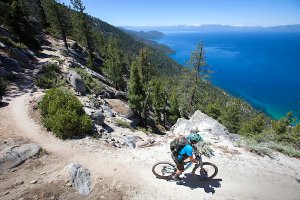 This event is perfect for every cyclist—from beginners to seasoned amateurs and cycling pros—and features curated 15-mile, 30-mile and 50-mile trails designed to challenge and reward participants. All cyclists will climb to the eastern edge of the Sierra Nevada, passing iconic landmarks along the way. Ultimately, riders will be rewarded with breathtaking views of Lake Tahoe and the Nevada countryside. Kate Courtney, the current Elite World, Pan Am and National Champion in mountain biking will be riding in this year’s event. Last year, the Off-Road had a 98 percent finish rate, so all interested cyclists are highly encouraged to participate!

Carson City is rolling out the silver and blue carpet for event attendees, including non-cyclists, by closing North Carson Street to host three days of free live music, an industry expo and the spectator-friendly Fat Tire Crit. And, in true frontier fashion, all of downtown Carson City will be an open container jurisdiction giving folks the freedom to responsibly roam with their libation of choice.

Carson City is one of the most historically rich capitals in the United States, serving as the epicenter for America’s largest-ever silver strike, the Comstock Lode. Nevada’s rich frontier heritage can be seen and felt walking through downtown Carson City and mountain biking on historic flume trails, which date back to the 1850s. Few places in the West offer the unique balance of outdoor recreation and historic sightseeing found in Carson City.

The Carson City Off-Road promises to be one of the most unique mountain bike events in America. Join us for a weekend of good times on two wheels in Nevada’s state capital.

6 Ways to Enjoy a Wellness Weekend in Carson City

All Things Outdoors in Carson City