The Brewery Arts Center has a newly created mural on the Second Street wall done by an artist from the Nevada Artist Association Gallery, Diana Uzzell.  Diana graduated from University of San Francisco with a Bachelor of Science degree in Organizational Behavior. The degree did not help Diana paint, it did help her think. She painted her first oil on canvas thirty years ago. The painting was awful. Her mother lovingly placed the painting on the wall with the declaration, Diana can do better. After a husband, five children and 25 years passed she tried painting again. In 2014 she did do better. For the next 6 years her talent flourished. Trusting more in science than the metaphysical, Diana reluctantly recognizes her talent was not self-taught. Having no proof, she credits her skill to the Akashic record. Today, she paints and takes care of her family.

Complete with a quote by Picasso, Diana’s piece is beautiful and compliments the Bryce Chisholm mural on the west facing wall of the annex nicely.  Also new as of last year is a mural painted on a storage container by Kathy Shaw, Nadia Hill, Udon Edmonds and Daniel Beene.  This delightful piece was inspired by its surroundings and features many plants and animals native to Northern Nevada and of course, those beautiful Sierra skies.

“When Diana approached us about creating a mural on the wall, I asked her to create ‘something Banksy’ with the pipes and obstacles already there.  A few days later she sent me the design and I was beyond thrilled.  It never ceases to amaze me how much talent we have here in Carson City”, says Executive Director Gina Lopez.

There are a lot of changes happening at the BAC, most visibly is the new roof on the Performance Hall made possible by a generous donor and a grant from the Brownfield Foundation.  That work is currently being overseen by new Director of Operations Michael Wiencek.  With the new roof going in, the crosses will come down and be given to the St. Theresa’s Catholic Church at their current location and artist Bryce Chisholm will come back and continue his mural from the west facing wall, on the stairs and up the steeple of the Performance Hall.   “We wanted to connect the buildings of the two block campus even more”, says Michael Wiencek, “although we’ve owned the Performance Hall for 20 years, people don’t realize that it is part of the BAC.  This visual of the mural on both sides of Minnesota Street will help people to make that connection”. 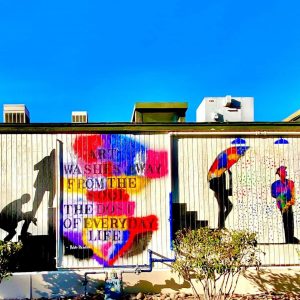 If you cannot make it to view the new murals in person, there is a “Public Art” link on our website breweryarts.org that features all of the outdoor art.

Trekking for Treasures in Carson City

Celebrate the Season in Carson City