If you’re a fan of spooky stories, then grab your fuzzy blanket and a flashlight because there’s no better time to delve into the eerie and the unsettling than during the month of October. After reading these tales of history, Carson City will be at the top of your list for a fall road trip to see if you too get a glimpse of the phantoms that roam around the Silver State’s capital. 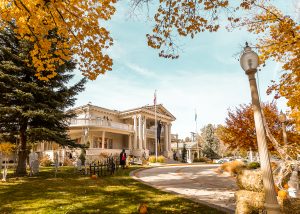 Beware: The Nevada State Governor’s Mansion isn’t haunted by witches or vampires but rather a woman and a young girl.

In 1907, Mrs. T.B. Rickey, who lived nearby, sold a large land parcel to the government for only $10 and George A. Ferris, a Reno architect, was hired to design the mansion for $22,700. By July 1909, you could spot the elegant two-story mansion as you drove along Mountain Street in Carson City.

Shortly thereafter, Governor Denver Dickerson and his family moved into their new home, and in September of that same year, little June Dickerson was born. To this day, she’s the only child to be born in the Governor’s Mansion. And that could be why she’s still roaming around in the halls.

For many years, staff and overnight guests have come across the same apparition. They’ve seen a woman wearing a long white dress, who is thought to be First Lady Una Dickerson, and her daughter June, wandering around the second floor. But they’re not roaming the halls on their own as many have also felt a male presence. He’s often heard going up the staircase to the second floor and playing around opening the doors in the parlor.

While it may sound spooky, there’s no need to worry. These three live-in guests don’t mind having roommates. They’ve always shared their home with the current governor and staff.

No one likes being followed, especially when it seems like no one is behind you. Built in 1863, the Ferris Mansion is well known because of two things; it was the childhood home of the man who invented the Ferris Wheel and also because of its paranormal activity that has persisted well after his passing.

Ferris lived in the mansion with his wife and two children, Mary and George, Jr. As far as Nevadans know, the paranormal activity began the day that Mary was getting married.

Mary couldn’t think of a better place to wed than her grand home. And while the wedding was magical, it wasn’t quite the magic they were expecting. An unknown woman who was spotted in a wedding dress in the backyard by several guests. But when they asked George Sr. about the second bride, he assured them that there was only one.

Soon after, the Ferris family found that prior to Mary’s wedding, there had only been one wedding. Unfortunately, this bride didn’t have the fairytale wedding she hoped for as she was left standing at the altar by her groom-to-be. Apparently, she’s still waiting. 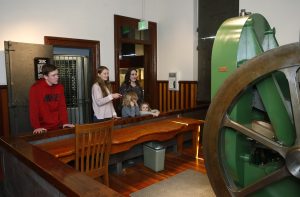 Built in 1863 from sandstone blocks that were cut-to-size in the state prison, the Nevada State Mint building is now home to the Nevada State Museum. The project was supervised by the Father of Carson City, Abe Curry, and it led to producing $49 million in gold and silver coins throughout the last 13 years.

While it doesn’t produce coins for circulation anymore (and no, a coin shortage is not the type of spooky we’re talking about), it’s known for something more gruesome.

Abe Curry doesn’t haunt the building alone, the spirit of Osborne Parker also lives within the Carson City Mint’s walls. Parker was accidentally crushed to death when equipment fell on him in the basement. Since then, museum staff have heard unexplained footsteps. Parker and Curry don’t like to walk around too much though. They sometimes use the elevator or at least, that’s what we think since the elevator is known to operate all by itself.

While it may sound eerie, many consider Curry and Parker the museum’s friendly guardians. They love the place so much that they’d rather stay to keep a close eye on it and on its visitors as well.

Need to experience some in-person goosebumps as you roam Carson City’s haunted buildings? Don’t let us have all the fun. Take a roadtrip to Carson City any season. These friendly spirits are here year-round.

Trekking for Treasures in Carson City

Celebrate the Season in Carson City