For the third year in a row, Jim Phelan of the Fox Brewpub is donating a gift card to the person whose hunt is drawn from the correct entries. You can download or complete the hunt online using a mobile device by visiting carson.org/hunt, or pick up a hard copy at the Planning Office, 108 East Proctor Street.  To be considered for the prize, your completed hunt must be turned in by May 28, 2021. Maps of the Kit Carson Trail are available at Visit Carson City, 716 North Carson Street or can be downloaded here.

In celebration of Historic Preservation and Archaeological Awareness month, the City’s Historic Resource Commission organized the 12th Annual Scavenger Hunt. The scavenger hunt challenge for 2021 focuses on building foundations. Carson City’s historic buildings literally rest on a variety of stone, brick, and concrete foundations. These anchor the building and keep wooden sills from direct contact with the ground. Earliest foundations may have been as simple as large boulders placed strategically at intervals to level and support the wooden structure.

Sandstone blocks quarried at the Territorial Prison (now the Nevada State Prison) were often used to create a more permanent and fully enclosed foundation. During the 19th century, inmates extracted and dressed the sandstone taken from the perimeter of the prison. In fact, scattered throughout Carson City, many buildings are built entirely of this material. Brick and concrete were also favored foundation materials.

Notice the new stone plaques in front of each historic building along the Kit Carson Trail. Visit Carson City and Silver State Industries worked with prisoners to chisel sandstone from the original quarry to create bases for the name plaques at each building along the trail.

The task this year is to identify addresses for each of the 20 examples found in the historic district and downtown commercial core. Look for chiseled sandstone blocks, brick foundations, or concrete. Two unique foundations are covered with pressed tin and painted. In the Historic District you will see some instances where sections of the original foundation stone were replaced, but the stones were re-purposed as curbing, steps, and walls. 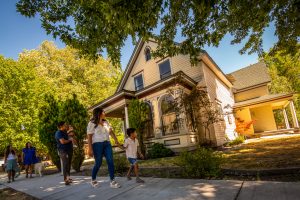