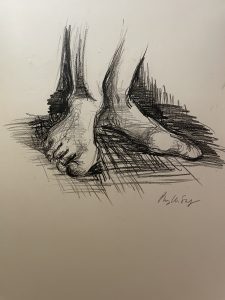 A reception for the artist will take place on Friday, February 4, 5 – 6:30 p.m. The free exhibit is open to the public though April 20, 2022, Monday through Friday 9 a.m. to 7 p.m., in the college’s Bristlecone Building, 2201 West College Parkway, Carson City. The drawings will be for sale as a fundraiser for the Capital City Arts Initiative.

Even though Shafer is known for her landscape paintings, this exhibition comprises studies made while teaching. None of these works are considered, by the artist, to be finished works of art. Rather, they are studies that were done as teaching demonstrations in her classes. Careful study of the human form is a rigorous discipline and one that can improve observational skills in all artists. What Shafer realized as she explored the realm of figure drawing and painting was that the landscape is really one giant figure. Seeing relationships between the gestures and nuances of the figure very easily relate to the land. There is also something very fresh and inviting about seeing an artist’s unfinished studies. It allows us a glimpse into the working process of the artist. It is our hope that this exhibition provides that behind-the-scenes glimpse into an area of creative expression not normally seen in Shafer’s oeuvre.

American painter Phyllis Shafer lives and works in the Sierra Nevada and Great Basin region. Although Shafer’s formative years as an artist were spent in New York and the San Francisco Bay Area, over the past two decades she has worked primarily in the American West to develop her own style of landscape painting.

Shafer completed her Bachelor of Arts degree at State University of New York (SUNY) Potsdam, NY in 1980; she spent the 1978-79 academic year living and studying in New York City through a program offered to SUNY students through Empire State College. From 1981 to 1985 Shafer lived and worked as an artist in New York’s East Village before moving to the West Coast in the mid-1980s. She completed her Master of Fine Arts degree at the University of California, Berkeley in 1988.

Shafer moved to the small, northern California coastal community of Bolinas in 1991 and became active in the San Francisco Bay Area arts community. She worked as an adjunct instructor at Academy of Art College (now University), San Francisco; San Francisco State University; and Diablo Valley College, Pleasant Hill, before accepting a position as full-time instructor at Lake Tahoe Community College in South Lake Tahoe in 1994. She served as Department Co-Chair and Gallery Director at Lake Tahoe Community College for 27 years and has recently retired from that position. Shafer is currently represented by Stremmel Gallery in Reno, NV.

Chris Lanier, professor of digital art at Sierra Nevada University, wrote the exhibition essay for Phyllis Shafer: Figure Studies, which CCAI published as a gallery handout and online archive. Working in digital animation, web production, and comics, Lanier said he enjoyed producing hybrid forms. His animations have screened at Sundance film festival, and he won the Grand Prize for Internet Animation at the Ottawa International Animation Festival. His art criticism essays have appeared in numerous online and print publications, including The Believer, Comics Journal, HiLobrow, Furtherfield, Rhizome, and the San Francisco Chronicle. 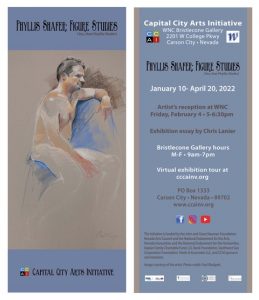