Stewart Indian School served as the Indian boarding school for Great Basin tribal children from 1890-1980. It was part of the federal government’s assimilation policy that removed children from their families in order to teach students English and job skills, all part of an effort to eradicate Native culture. In the 1930s, federal policies became more progressive and students willingly attended to be educated. The campus still has 65 beautiful stone buildings built by Hopi stonemasons and Stewart students on 110 acres. In 1985 the school was listed in the National Register of Historic Places. A free, outdoor, guide-by-cell audio tour of stories by Stewart alumni is available anytime to visitors.

The new Stewart Indian School Cultural Center & Museum is located in the former administrative building at the front of the campus. It features a storytelling room for craft making, the Wa-Pai-Shone Gallery of Great Basin Native contemporary art, a research room, and a permanent exhibition about the history of the school. The history of the school is told by the Stewart Alumni Advisory Committee.

Open 10-5 pm, Monday through Friday, and closed on state and federal holidays.

Take a Virtual Tour of the Cultural Center & Museum
Click the photo and drag your mouse to see a 360 view.

The Reno-Tahoe Airport Authority (RTAA) has partnered with the Stewart Indian School Cultural Center and Museum, Nevada State Museum, Nevada Indian Commission, Visit Carson City, and Great Basin Native Artists Collective on a powerful and moving art exhibition entitled, “We remember your sacrifices, you are not forgotten: The story and art of the Stewart Indian School.”

On display through February 1, 2023, this unique exhibit tells the story of the boarding school located south of Carson City, run by the federal government, where Native children from the Great Basin tribal nations of the Washoe Tribe of Nevada and California, Western Shoshone, Northern Paiute, and Southern Paiute were removed from their families to learn English and job skills. 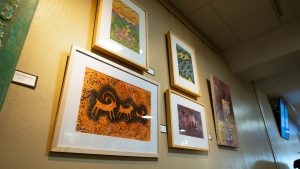 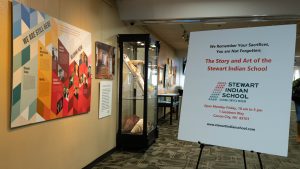