10.20.21: THE CAPITOL BUILDING IS AGAIN REOPENED TO THE PUBLIC! EXPLORE THE BUILDING AND THE BATTLE BORN HALL FROM 8a-5p, WALK IN TOURS ARE AVAILABLE ON SATURDAYS ONLY.

Walk in tours will be available on Saturdays only but guided tours of the State Capitol may be requested by calling the Education Program at the Nevada State Museum at 775-687-4810, ext. 243. Guided group tours require at least 2 weeks notice and are subject to the availability of volunteers. Early booking is recommended (2–3 months in advance) for the busy season (April–May).

About the Nevada Capitol Building

For many years after its 1870 construction, Nevada’s Capitol Building stood a lonely vigil in the center of Carson City. Grounds for the capitol complex had been set aside by town father Abe Curry, but Nevada started out small and the need for big government had not developed.

Now, more than 130 years later, the building is still used, standing as a testament to the foresight of Nevada’s founders. Other grand Carson City buildings surround the capitol, marking the incredible growth of Nevada’s capital city. But the Capitol Building, constructed of native sandstone, holds the special designation of second oldest capitol building west of the Mississippi River.

Today, the capitol complex in the heart of Carson City provides a picturesque campus setting which includes the State Capitol, Legislative Building, Supreme Court, and State Library and Archives. What was once a dusty, sometimes muddy, pit in the middle of a growing frontier town, is now lush with native plant species and buildings of impressive architectural detail.

When the ambitious founders of Carson City laid out the town in 1858, they had dreams of a new territory, and then a new state to follow. Ten acres, known as the Plaza, were set aside in the belief that Carson City would be chosen as the capital of a new government in western Utah Territory.

The demands of the Civil War pushed the creation of the Nevada Territory in 1861 and the territorial legislature selected the fledgling community of Carson City as it’s capital. In that first decade, the Plaza remained empty. Statehood in 1864 saw Carson City become the state capital of Nevada, but the constitutional convention made a provision that no state capitol would be built until after three legislative sessions had passed. Some people still believed that the capital would be moved to a more central location in the new state. Fortunately, that did not happen. The building was commissioned in 1869 and built the following year. Additions, including the breezeway-connected library, and, in 1913, wings on the north and south sides have significantly changed the building’s look. 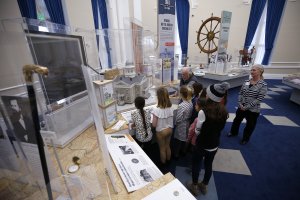 In October of 2018 the Battle Born Hall, Trailblazing Nevada exhibit opened to the public, showcasing a new museum on the 2nd floor of the Capitol Building.

The museum is free to the public. Trailblazing Nevada honors the remarkable characters who blazed new paths and found new ways to help our state and nation grow. It focuses on the historical events that defined Nevada before and after statehood.

The Battle Born Hall is 2,000 square feet and the new exhibit is presented in five exhibit areas that lead visitors on a tour from prehistory, to the mining boom, to statehood, to early Carson City through the 20th Century and looks ahead to the new Nevada of the 21st Century. It includes panels on many of the people and events that defined Nevada in its history.